I am really excited to have been a part of an amazing experience that showed me yet again how much I love my role!!  I jumped on board this project with an invitation from two lovely educators at Campbell Collegiate.  These two teachers, Naomi Fortier-Freçon and Leia Laing, were searching for a meaningful way to integrate treaty instruction and understanding into their French Immersion courses.  The project evolved from its beginnings, a one-school art project, into a four school, two day youth conference at First Nations University.

The project itself took on a life of it’s own as Leia and Naomi organized speakers, collaborated with staff, organized funding, and wrote grant proposals.  They were thrilled to receive a grant from the Saskatchewan Arts Board in the amount of $10,000 in order to further pursue this project.

With help from the organizing committee, the project began to take shape.  Regina Public Schools and the First Nations University were involved, as well as Elder Noel Starblanket.  The “teaching team” was selected through an application process; teachers from Balfour, Scott, and Martin Collegiates were selected to bring students to the conference and participate in the planning of the two days.

The project itself began with a leadership retreat for the “group leaders” in the days leading up to the conference.  These young men and women had the opportunity to get to know one another in preparation for the role they would need to play.

On day 2, the students all joined together at First Nations University and participated in a series of workshops led by volunteers that would allow them to better understand their role as treaty citizens.

Do indigenous people have rights to mine?  Dr Andrew Miller

The Métis Experience Outside of Treaties Calvin Racette

Students were allowed to select their sessions based on interest.

On day 2 of the conference, the students returned to apply what they learned about treaty citizenship.  They were asked to work in family groups to discuss the previous day and to work collaboratively to create the art piece that represents their understanding of treaty citizenship.  You can see the process and the final product below: 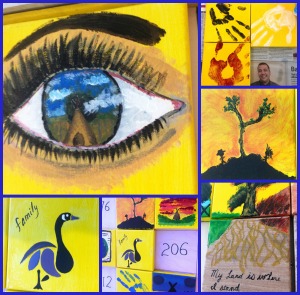 The hope is that students from each of these schools will take something away from this conference.  The intent was truly to understand their own role as treaty citizens as they are the next generation.  Their beliefs and understandings about treaty will pave the way for people of Saskatchewan.

One thought on “Treaty 4 Youth Project”

This is me... mom to two little guys, wife, teacher, consultant, student.

Error: Twitter did not respond. Please wait a few minutes and refresh this page.

Independent Consultant sharing my learning with others. Please scroll way down to follow me!!

Welcome to my adventures as a teacher, instructional consultant, grad student, wife and mom...

Two paths diverged in the woods...

Give the pupils something to do, not something to learn; and the doing is of such a nature as to demand thinking; learning naturally results." -John Dewey

Social Media and Technology in the Modern Classroom

Get Appy with Us!

thoughts on education by Grant Wiggins

A Superintendent with Heart

Meaningful learning and effective teaching with a Finnish twist

This site explores the inner workings of my mind, on any given day.

The Value of Wonder

Quiet in the madness